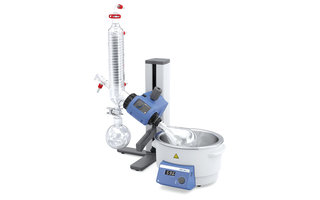 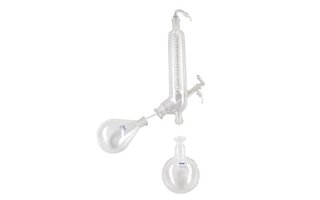 In addition, rotary evaporators serve as innovative devices for food preparation in the molecular kitchen.

By heating the evaporating flask in the heating bath, the substance to be distilled (usually solvent) evaporates and the steam flows through the steam pipe into the cooler. There it settles on the cooling surface, the condensate flows into the collecting flask. A separation of substances is achieved because their boiling points differ: at a certain temperature certain substances evaporate and others do not (yet) evaporate. Placing the device under vacuum lowers the boiling temperature so that higher boiling solvents can evaporate at a lower temperature than would be the case at normal pressure. This temperature drop is important if the substance in the solvent is temperature sensitive. Decomposition can be prevented by the reduced boiling temperature. The shaft seal in the device seals the rotating steam pipe against atmospheric pressure and maintains the vacuum in the device.

However, the rotary evaporator is not applicable to every separation problem. If the boiling points of the components of the solution are too close, they will not separate. For example, it is not possible to separate mixtures of methanol and ethanol clean on a rotary evaporator. This requires fractional distillation. Even with solvents boiling too high, you should resort to reduced pressure distillation, as the achievable pressures and temperatures are limited depending on the device: When using a diaphragm pump, the lowest pressure in practice is about 10 mbar and the attainable heating bath temperature is limited to 180 ° C when using an oil bath.

There are also fully automated rotary evaporators. Unlike conventional devices, they cannot only control input parameters such as pressure, temperature and speed. You can also track and control the whole process.

When working with underpressure, a rotary evaporator must be located in a fume hood or near safety walls, eg surrounded by acrylic glass, so that as few splinters as possible are spread during implosion.
Low-boiling, highly flammable solvents such as diethyl ether and carbon disulphide must not be distilled off with a rotary evaporator because the fire hazard is then very high. The heat from a poorly lubricated lip seal can be enough to ignite the fumes.
Solutions of unstable products such as azides or peroxides should not be concentrated using a rotary evaporator or only if special conditions are met. Under no circumstances should the solution be completely evaporated. Ethers such as dioxane or tetrahydrofuran and many other ethers can lead to the formation of ether peroxides which, in highly concentrated form, tend to explode.