Navigation
Back to Equipment | Own brand products Equipment Burners and accessories 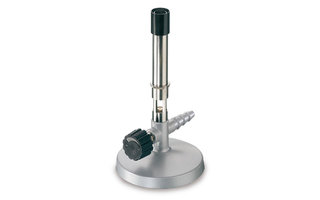 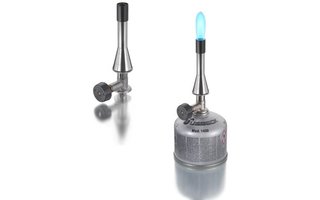 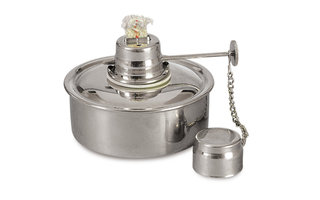 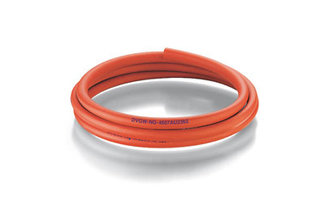 The Bunsen burner is a small gas burner in which the combustion gas partially sucks in the combustion air itself, based on the principle of a jet pump.

In addition to the Teclu burner, the Bunsen burner is often used in the chemical laboratory to heat material samples or liquids. The Bunsen burner is named after Robert Wilhelm Bunsen (1811-1899); however, the original invention comes from Michael Faraday and was decisively improved in Heidelberg in 1855 by Peter Desaga, the university's instrument maker.

The laboratory gas burner consists of an approximately 15 cm long piece of tube in which the gas flows upwards and the combustion air itself sucks through adjustable openings based on the principle of a jet pump. With modern burners, a grid or fine holes on the top of the burner prevent the flame from flashing back into the burner. The burner usually works with propane, butane or town / natural gas.

The burner stands on a heavy base to which the fuel gas supply is also attached. A pipe that resembles a small chimney is perpendicular to it. The fuel gas passes through an opening through which an oxidant, usually air, is drawn in. The opening is adjustable in width. At the top of the tube, the gas is ignited and burned. When the air supply is open, the oxidant and fuel gas mix in the Bunsen burner. The flame then burns like a blue and hot premixed flame. When the opening is closed, the fuel gas mixes only with the oxidizer at the top tube outlet and develops a lower temperature. Such a diffusion flame, also called a luminous flame, is cooler up to 900 ° C and looks yellow. Intermediate forms of the flame are called partial premix flames. The flame temperature is adjustable between 350 and approx. 1000 ° C (Teclu burner 1300 ° C). The flame is divided into core, mantle and the almost invisible flame edge. The core temperature is about 250-550 ° C, the mantle (depending on the source between 1000 ° C and 1200 ° C) and rim (around 900 ° C), on the other hand, are significantly hotter, but less easy to see because here the gas burns almost completely. The cones created with a premixed flame and, to a lesser extent, with a partially premixed flame, are divided into an oxidizing flame (outside) and a reducing flame (inside), with the highest temperatures at their transition.

The Bunsen burner distinguishes between two different types of flames, the diffusion flame and the premix flame.

Bunsen burners are mainly used for preliminary tests in analytical chemistry, for example solder tube samples, borax or phosphor beads and flame coloring. When the air supply is fully open, it can also be ensured that a sterile environment is created around the flame. Thus, it is possible to perform sterile work in the vicinity of the flame, such as. B. in microbiology. Bunsen burners are also used in molecular cooking to heat up various dishes. Even the simplest glassware can be carried out with a Bunsen burner, for example melting ground glass tubes and glass rods or loosening cuts.